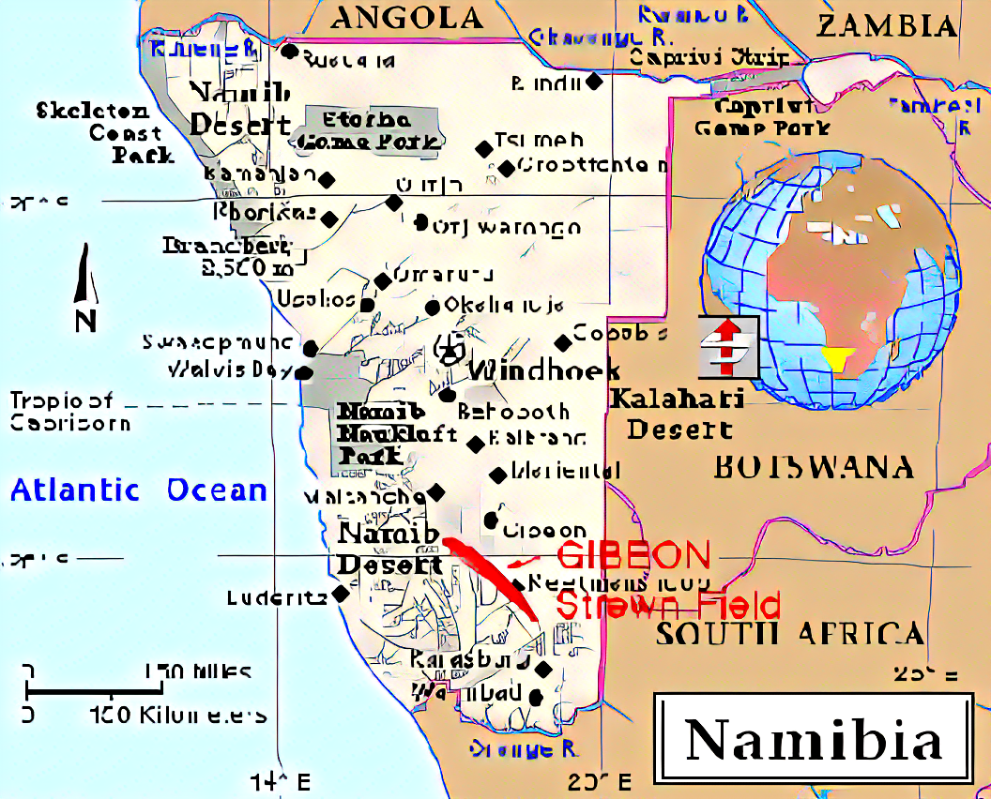 The Gibeon meteorite entered our atmosphere about 30,000 years ago. It exploded high in the atmosphere showering fragments over a large strewnfield in what is now Namibia, Africa. This meteorite was officially discovered in 1838. Archaeologists though, have found evidence that the indigenous people of the region had been making spear points and tools from it for perhaps thousands of years before its “official” discovery. This meteorite traveled through space for billions of years before it was trapped by the Earth's gravitational field and pulled to earth as a brilliant fireball.

The Gibeon is an Iron Meteorite and is classified as a group IVA fine octahedrite and is composed of mostly Iron (91.8%) and Nickel (7.7%) with about 0.5% other trace elements. The beautiful crystalline patterns found within Gibeon meteorites are known as Widmanstatten patterns, and are unique to meteorites. Scientists agree that the Widmanstatten pattern supports their theories that these cosmic meteorites were once ancient planets that were destroyed around 4.5 billion years ago by catastrophic events during the formation of our solar system.

These signature patterns (which cannot ever be man-made) were formed over literally millions of years of very slow cooling. It is estimated that it took about 1000 years for these molten remnants of planetary core to cool by just 1 degree Celsius - further suggesting these meteorites have been in space for many millions of years.

The price of Gibeon meteorites has gone up over the past few years which have led to some unscrupulous sellers passing off the Rust-Prone “Muonionalusta” meteorites as stable "Gibeon" meteorites. Muonionalusta meteorites look similar to Gibeon when cut and etched, but it is a much cheaper and rust prone meteorite. Some Chinese companies are selling Gibeon meteorites and jewelry which is actually Muonionalusta (which is rust prone). A lot of this is found at large online bid and purchase now sites. As Gibeons are being exploited these days, it is extremely important to buy from reputable dealers and meteorite sellers. Buyers beware!

Common minerals found in Iron meteorites are kamacite and taenite, which are both composed of Iron and Nickel. Kamacite has a lower concentration of Nickel than taenite plus a different crystal structure. Most iron meteorites have unique crystalline structures known as "Widmanstätten" patterns. These patterns were named after the Austrian Count Alois von Beckh Widmanstätten who discovered these patterns in 1808.

Widmanstatten patterns are formed by interwoven bands of kamacite and taenite, which can only form over literally millions of years of very slow cooling. It has been estimated that it took about 1000 years for these molten remnants of planetary core to cool by just 1 degree Celsius! There isn't any material on Earth that exhibits the Widmanstatten pattern of meteorites, and each piece of meteorite has its own unique pattern.

The beautiful crystalline patterns tell us about the meteorite’s composition and how long it took to cool the planetary core the meteorite came from. The larger the crystals are, the longer it took for the molten metal to cool. The size of the crystals is also affected by the nickel content of the meteorite.

These images shows the Widmanstätten pattern of a polished and etched slice of the Gibeon IVA fine octahedrite. The light kamacite bands are bordered by darker taenite ribbons. The patterns formed by the bands and ribbons vary depending on the angle of the cut to the octahedral crystal structure of the nickel-iron

On Reserve for Wyoming

This Rare Widmanstatten pattern etched Gibeon Meteorite cube is an excellent reference specimen for your meteorite collection. It is cut and etched on all 6 sides with each side showing a different pattern based upon the angle and location of the cut. The light kamacite bands bordered by darker taenite ribbons provide interesting and different patterns on each side. This specimen was procured from a meteorite dealer in Tucson at the 2005 show. It has been in our personal meteorite collection for the past 17 years.